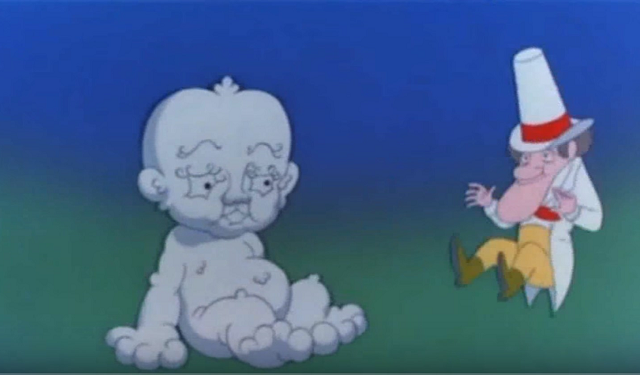 ' Okay,' you're probably saying to yourself right about now- 'what the fuck is this? what the fuck is this uhhhh lucky charms mascot lookin shit?' And all I can really say is that... I said I would review everything I've put down as completed on my anime list, and I meant it. I have journalistic integrity. I know this movie is obscure, and old, and ugly, but by God, I'm sticking my guns. I watched it a while back with my friend Helen, we have this habit of like... feverishly searching up really old cartoons to watch, you know? I do really like vintage stuff, older stuff. I plan to review a lot of older stuff- perhaps not as old as this, but I mean, it's sort of a sign of things to come. Let's get started.

Andersen Monogatari is a 1968 anime film, dubbed in English as The World of Hans Christian Andersen- that has significantly more syllables, I'm not gonna call it that again, I don't trust vintage dubs anyway. There is also a TV show sharing the title of this movie, produced in 1971, but I haven't seen that, so I'm not going to mention that further in this review. It follows a heavily romanticized version of Mr. Andersen's childhood with fantastic elements woven in from stories he would go on to write, such as The Little Matchstick Girl, and Red Shoes; it also sort of costars a character referred to as Uncle, a magical storyteller man who has one of the worst chins I've seen outside of a seth mcfarlane production. The plot is a little... rambly and open-ended, largely relying on contrivance and with a couple of musical numbers, if my memory serves correct. Hans is a poor child who dreams of being a writer, but is discouraged; he also has a very strong wish to go see the opera in his city, but, being an adorable urchin, is again too poor to go. And gets discouraged. Through the efforts of the fae-like Uncle, some talking animals, and his friendship with the little match stick girl (who is his next-door neighbor in this), he eventually accomplished all of his dreams. It's a very fluffy, almost Western style movie.

One of the big issues I think that people unfamiliar with older films are going to have is that the art in this movie is very, very dated; the music suffers from this also, but is at least more passable for nostalgia reasons. There are works from this era that I think have aged well, and still look good; after all, Tezuka was very much active at this point. One of my biggest complaints is of course, the appearance of Andersen's mystical Uncle; honestly, there's just something about him that seems very uncomfortable to me. He's not pleasant to watch, and doesn't flow as well as the rest of the art. The musical bits and dream sequences are the most visually pleasing parts of the film; most of the rest of it is very forgettable.

I would like to specifically mention this- the usage of Western fairytales in an anime feature. If you look at a lot of vintage anime, you're well aware that there was a strong interest in adapting Western stories; if you don't, well, you know now, it was a very popular trend for a good while there. And I would say that the elements lifted from Andersen's actual stories are probably the most memorable parts of the feature. I think it's been a few seasons since we've had a straight adaptation of a story from the Western sphere, so if you're used to newer anime that doesn't draw from heavy Western influences, this probably would be a little strange to watch. I would best liken it to say, a weird older movie you'd watch at your grandma's house on VHS as a small child and then never ever hear of again.

For my last little point of focus with this, I want to say some stuff about Andersen himself, and how I felt that his portrayal in the film was a little insensitive to his nature as a person. In particular I think the movie implies a sort of heteronormative expectation of a relationship between him and his neighbor; not explicit, but implicitly framing it as something that could develop further into a romance. I understand that it's a children's movie from the late 1960s. I still think that it was a very tasteless decision for the staff to make while developing the film, as Andersen's gayness was a very large part of what drove him as a writer, and it makes watching the film in the modern day vaguely uncomfortable.

Overall, I think the movie was by-and-large just forgettable fluff with a couple moments that are interesting from an artistic perspective; it's very hard to engage with the characters emotionally, as they are all very flat, with little character development. It hasn't aged well at all, and I suspect that even upon its release, had a lukewarm reception. If you're interested in watching an older anime movie adapted from Western source material, I would recommend something like say, Gulliver's Travels To The Moon instead; I am going to make a review of that movie eventually, but for now suffice to say it's much more interesting and experimental.